But that also means that it’s time for another episode of “What Lizz Did This Month.”

The biggest news is that I launched my Patreon page! Woo hoo! Go here for more info and maybe sign up to be a patron?  Also, tell your friends?

Some housekeeping with regards to the new page:

Canon Blast! will now be featured on Patreon. The bonus companion short fiction will be posted on this blog in the middle of the month following when it appears on Patreon, because I’m giving those away.

Maybe, eventually, I’ll re-post the Canon Blast columns on here too, but if you want to keep up with the series in real time, you’ll have to head over to Patreon. Thank you in advance if you become a patron–you’re cool! And keeping me in my coffee habit. Much appreciated.

My decopunk fairy tale retelling is still shortlisted! I’m getting anxious, but trying to be patient and not get my hopes up too much. Shortlisted still has plenty of room for rejection.

I submitted one story in October: a completely weird little flash that is vaguely about plums and titled “Forgive Me.” Yes, you did notice a William Carlos Williams reference.

I’m working on my revisions for a story that was accepted to an anthology which will be out next summer. It was the revise and resubmit that turned into an acceptance in August. Not sure when I’ll be able to tell anyone what it’s for… February? Maybe sooner.

My novel has been gathering dust for ages, but the launch of Erewhon Publishing has me excited so I think I will write a synopsis and send it out one more time before I go about completely restructuring it again. It fits what they’re looking for, so I have nothing to lose.

Now I just have to figure out how to condense a 75k-word ensemble cast alternate history into a one page synopsis. No one tells you that that’s going to be the hardest part of being a writer. Synopses are the actual worst.

I’m not technically doing NaNoWriMo this year, but I am making it a goal to write SOMETHING every day. I have launched a silly adventure serial on Patreon (because the world is terrible and depressing and everyone needs something fun), and I’m also working on my trilogy of time traveling, universe hopping, novellas.

Most of October was spent reading the Foundation trilogy, so I have nothing earth shattering to recommend at the moment. Actually–that’s not entirely true. Last night I finished Jeff VanDerMeer’s Veniss Underground. I’m not technically done with the book, because there are a couple of additional short stories in it, but I did finish the novel.

It took me about 25 pages to get into the rhythm of the writing but ultimately, I loved it. It’s like reading a surrealist painting. The language is beautiful, but it’s weird and trippy and occasionally really gross.

I finished a scarf! 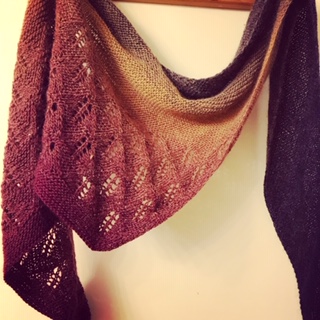 I’ve named this one Angled Up in Blue, because it starts with a very thin point and then gradually increases into a reasonable width by the other side. I’m still not sure that it’s my favorite thing, but that burgundy matches my coat nicely, so I’ve been wearing it.

And that’s pretty much it for October.