This stunning little gem of a novel will likely end up on my best-of 2019 list at the end of the year. It’s been on my to-read list for quite awhile, because I was intrigued by the premise:

In an alternate 1920s Montreal, the wealthy can have their memories extracted from their own consciousness and placed into Mems, identical copies of their body that hold only that particular memory. Dolores Extract No. 1 is different–she isn’t locked eternally in one moment; she’s fully conscious and holds all the memories of her Source up to the point of extraction, and then all of her own memories after. 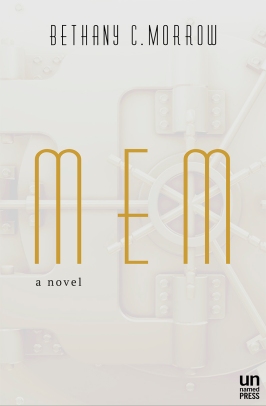 Dolores Extract No. 1 lives considerably longer than the other Mems, forever physically nineteen, but she’s lived outside The Vault, where the Mems are stored, for the past twenty years. She’s developed her own personality and chosen the name Elsie to distinguish herself from her Source, because she realizes before anyone else does, that she is not the same person. The novel opens with Elsie being recalled to The Vault, although she’s unsure why. At least, until she learns about reprinting.

Mem is what we call Quiet Science Fiction. It’s a character study of Elsie, and although there isn’t a lot of dramatic action, it’s jam packed with ideas. The writing I found delicate and lovely, occasionally hazy, as is the nature of memories themselves.

At face value it’s a study of trauma and its effects on a person. Most of the Mems are created as the result of a negative moment in a person’s life, and Elsie is no exception in that regard. Her Source, Dolores, witnesses one of the first automobile/pedestrian accidents in the city. The pain of that moment is removed, and put into a Mem, but there’s a limit to how many times a Source can extract, because even after the very first one, their mind begins to splinter.

It suggests, as do later interactions between Elsie and her Source, that we need all of our memories to be whole. We need the experience of trauma to cope and move forward.

Another big idea packed into this little novel is the idea of what makes something autonomous, and, really, human. The Mems aren’t conscious of anything other than their moment in time, but they are living things that are identical to their Sources, and they do eventually expire. Are they alive, though? Are they human? Is Elsie, paraded around because she’s different MORE human than them because she can think for herself? Is Dolores MORE human than Elsie because she was the original? This book reminds me a little of Kazuo Ishiguro’s Never Let Me Go.

What further complicates this, too, is the concept of ownership. The Mems are the property of their Source, or their Source’s family. Elsie is recalled to the Vault to be reprinted and she has no choice, despite her celebrity and importance in the overall scientific efforts dealing with memory. Add to this the fact that Morrow makes it clear that Elsie is a black woman and it’s hard not to draw parallels to slavery, even though it is never mentioned explicitly in the text. It’s another layer for the reader to work through, and it’s handled very deftly, I thought, by the author.

I’m a sucker for anything Art Deco, and the worldbuilding in this novel, like the rest of it, is quiet and understated, but very effective. The parties that Elsie is taken to by the Professor, the theater she attends with his wife, the cars, and the houses are all described in such a way that I know exactly what they look like, even though it isn’t always specific. It’s very Gatsby.

The writing feels a little Gatsby, too. As I mentioned before, it’s hazy. The narrative drifts back and forth from Elsie after her extraction to her memories as Dolores for the first nineteen years of Dolores’ life before the extraction. A couple of times I had to go back and reread a sentence or to in order to figure out who was speaking, but it works.

I could probably gush for a little longer about how much I enjoyed this book, but then I would run the risk of spoilers and I don’t want to give away at all the reason that Elsie is special. It’s a brilliant solution to a thought puzzle.

You can buy this book HERE, and I highly recommend that you do. I look forward to Bethany C. Morrow’s next book.